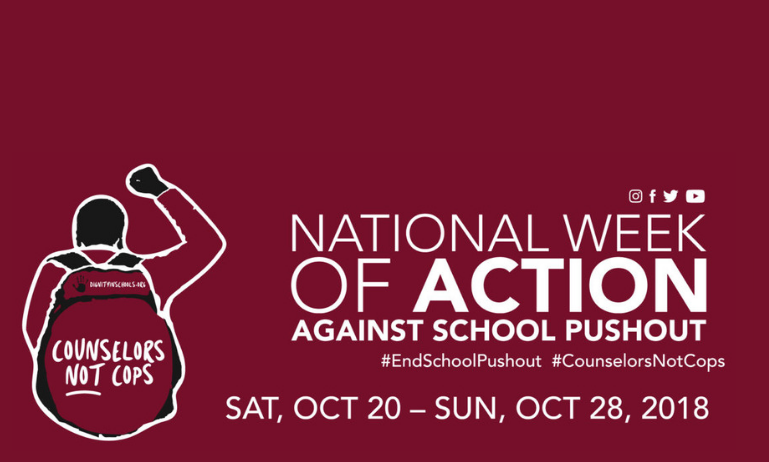 The 2018 theme was Counselors Not Cops, and with our allies throughout the country, DSC CA will be holding events across our five regions in Central Valley, Central Coast, Inland Valley, Bay Area, and Los Angeles.  DSC CA is in solidarity with this year’s theme as it supports our political goal of dismantling law enforcement’s relationship with the public education of Black and Brown communities as the next most important milestone in ending the school-to-prison pipeline.

10.21.18
BOP will be co-hosting a school board election forum on public education. Oakland school district seats 2, 4, & 6 are up for re-election. This is a forum for community members to ask questions to the candidates and hear their responses on important issues that matter to parents, students and community members.

10.23 | 6-8pm
​Anti-Police Brutality Panel - A discussion about police brutality in schools & community. Hosted by the BSU of the University of San Francisco.

10.23
GSAN Panel Lift Us Up Don't Push Us Out - Voices from the Bay Area Ed. Justice movement - feature BoP/Coleman/GSAN/Tia Martinez 10.24
Twitter Townhall - Conversation with partners Coleman, GSAN, CURYJ, CADRE, DSC CA and other allies to discuss the state of police free schools in Oakland, the Bay Area and the country, and reimagining what safety looks like in schools for Black youth.

10.25 | 6-8pm
Black Sanctuary Listening Session - A session to speak with school staff and administrators to make a commitment to not calling armed law enforcement on students. This session is aiming to have school staff and administrators re think; what sanctuary means and to re imagine schools without police and alternatives to calling the police.

10.27 | 11-12:30pm
Know Your Rights Training - A training based on state law and local policies that BOP got passed around rights for students and families on school discipline. Partnering with Roots Community Center

10.27
National WOA Panel - BOP will be participating at the National event for the Week of Action in Chicago this year, and the theme is Counselors Not Cops. COFI/POWERPAC and Woman of God's Design

10.23 | 9am
YA Parent Alliance Call for Youth Restorative Supports & to Stop Punishing Trauma
Board of Supervisors Meeting
Youth Alliance

10.25 | 5:30pm
What’s Your Story?
Parent and Community Listening & Planning Session: parents and youth will come together to discuss and prepare statements for the upcoming meeting with state officials to lift up systemic challenges between juvenile justice, education, and child welfare systems, its impact on families and the school to prison pipeline.

10/20 | 8:30am
Data & Dialogue
​Decriminalizing SBCUSD
Congregations Organized for Prophetic Engagement (COPE)
The briefing event will look back at efforts to decriminalize SBCUSD through a data presentation and dialogue on bright spots and what is still needed to transform school climate.
​
​

10/23 | 11am
Student Social Media Blast
Congregations Organized for Prophetic Engagement (COPE)
Students will tell stories about their experiences with counselors and/or safety officers in their schools (current and other). Facilitators will ask students to focus on the way they felt in the moments rather than the moment itself.

Los Angeles
​
​10.22 to 10.26 | 8-3pm
South LA Parent-Led Classroom Observations
In the Los Angeles region, South LA parents will lead in the ongoing monitoring of School-Wide Positive Behavior Intervention Support Discipline Foundation Policy which we won in 2007. CADRE will continue its annual tradition of parent-led classroom observations across 20 targeted schools in South LA and gather data about classroom climate and classroom-level implementation of School-Wide Positive Behavior and Intervention Support. CADRE parent leaders will share their experience, observations and lessons learned on October 25th, and will eventually become an evaluation by parents for LAUSD.

10/26 | 3pm
Trunk or Read
Fathers & Families of San Joaquin
Event filled with fun for children and educational information to
parents and community regarding literacy and education. We will be giving away candy, pumpkins, books, and I will be tabling at the event to hand out information related to Dismantling the School to Prison Pipeline and dispelling myths.
Juan Schwanker
jschwanker@ffsj.org
https://www.facebook.com/FathersFamiliesOfSanJoaquin/
https://twitter.com/ffsjstockton?lang=en

• Link to DSC National with information about National Week of Action
http://dignityinschools.org/take-action/national-week-of-action Our Never Again
Our “Never Again” is rooted in the Black-led Reconstruction and slave revolt that brought down chattel slavery and opened up the first public schools. Our “Never Again” abolished Jim Crow education and led the Chicano Blowouts. Organized by students, parents, and their broader communities, our “Never Again” birthed liberatory movements for ethnic studies, critical pedagogy, bilingual education, restorative justice and other transformative educational practices. Today, our “Never Again” rejects the school to prison and deportation pipeline and works to build a movement from the ground up, in California and nationwide.

Removing Cops from Schools
The Central Coast Movement Building (CCMB) team built a coalition of supporters, parents and students in the Monterey Peninsula Unified School District focused on School Resource Officers in their schools. Monterey Peninsula Unified School District stretches from the city of Marina to the north to the city of Monterey to the south, and encompasses the communities of Del Rey Oaks, Marina, Monterey, Sand City, and Seaside. The campus as of the 2017-18 enrolled 10,000 students.  Thanks to the CCMB organizing efforts and intensified work with community to address policing on campus, we forced the school district to reexamine the role of police in schools and successfully stopped Marina and Seaside from hiring police to patrol their campuses.

Organizing Against Cops on Campus
In Oakland, the Black Organizing Project (BOP) knows that the school-to-prison pipeline is a direct response to the rise of Black Power and a direct attack on young people. In 2011 the Black Organizing Project formed the Bettering Our Schools System (BOSS) Campaign in response to the murder of Raheim Brown by the Oakland School Police Department (OSPD). The campaign has been working to shift the narrative that police equals safety by calling for the full elimination of school police by 2020 and demanding that schools not contract with law enforcement.

While we have been able to see some wins from temporary reforms such as —having a complaint process, eliminating suspensions for willful defiance and reducing the police budget—  we know that it will take a complete transformation of the public education systems culture to ensure schools are sanctuaries for the most impacted youth. Since 2011 we have continued to be on the ground working with Black parents & students who have been negatively affected by the school to prison pipeline to seek transformative alternatives that will shift the culture in schools to one that is nonpunitive and values the lives of all children.

Building Solidarity
This is the way we build solidarity – aligning efforts across politically diverse regions and contexts to ensure that Black, Brown, indigenous, immigrant, LGBTQ, poor/working class communities of color across the state are included in our movement. We are collectively aiming toward a “North Star” and working on the ground, community to community, to share our struggle, capacity, political lessons, and strategies to win change in even the most conservative of regions.

​National Week of Action
Starting October 20th through October 28th, DSC CA allies in the Central Valley, Bay Area, Central Coast, Los Angeles, and Inland Valley regions will participate in the 9th annual National Week of Action Against School Pushout. This year’s theme, “Counselors Not Cops,” sends a resounding message to disrupt misplaced priorities and over-reliance on school police as the “only” solution to school safety.

Our DSC CA events aim to dismantle law enforcement’s relationship with Black, Brown, indigenous, immigrant, LGBTQ, and poor/working-class schools. Community-based engagement and forums will be held on racial disparities in education, rethinking school safety, dispelling racial stereotypes and myths about our communities, student and family storytelling about experiences with counselors and police, building “sanctuary schools” grounded in Black & Brown solidarity and resistance to surveillance and forced removals, and monitoring the fidelity with which hard-fought, community policy victories for transforming school climate are being implemented.

This is not a moment. This is history. DSC CA is a coalition built for the long arm of struggle and resistance to radically embrace and fight for truly safe, holistic, and healing schools for all.