DSC CA Convenes Its First Statewide Parent Organizing Exchange: “Me” to “We” 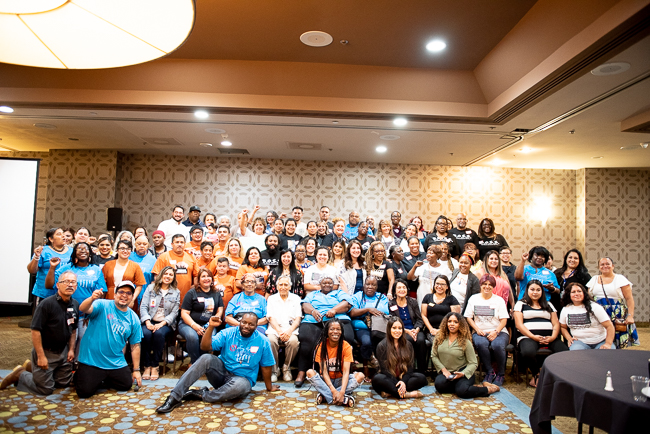 As we opened the day with introductions, seeing the room filled with parents from all over the state – wearing their organizational t-shirts and coming together on their own accord for a day of political education and relationship building – to advance our collective work to dismantle and end the school-to-prison pipeline, it had DSC-CA Statewide Coordinator Noemi Soto emotional. Fundamentally, it was a movement-building moment to behold; It was a years-long vision coming to fruition.
The objectives for the day were to:

With everyone wearing headsets and practicing language parity by waiting for translation back and forth English to Spanish and Spanish to English, the day moved from icebreakers to a brief grounding of what DSC-CA is about – movement building, and how this is different, broader, and deeper than everyone working on a joint campaign. In fact, it isn’t about everyone working on a joint campaign; instead, it is about everyone collectively committing to deepening our analysis, raising our consciousness, and clarifying our strategies so that our local campaigns make longer and longer-term impact and go beyond short-term victories. We agreed to learn together and from one another, to push ourselves and our efforts to end the STPP all across the state and to be sharper, more courageous, and more impactful. We invited the room to build authentic connections and political solidarity so that communication and sharing information across the state is built into our day-to-day organizing.

After parents from all the regions shared what they are organizing around, the highlights of the day were parents sitting in cross-regional groups and engaging with the alternating history lessons from Manuel Criollo and Tia Martinez, all of it validating what so many of the parents had lived through and are still living through – anti-Black, anti-indigenous, anti-immigrant conditions that have defined and continue to define our educational and criminal justice systems. Manuel covered the deep history of oppression on this land and how it shapes educational oppression, informs our work to end the STPP and remove law enforcement from schools; Tia shared compelling data about the rise of mass incarceration beginning in the 1970s, and its many intersections with racialized poverty, neighborhood pushouts, criminalization, and the school-to-prison pipeline.

Parents were then treated to some inspiring and truth-telling lunchtime keynotes from CADRE Senior Core Leader Roslyn Broadnax and the indomitable civil rights icon Dolores Huerta, who spent the entire day with us. Black-Brown Solidarity was the theme, and it was on full display.

To end the day on an organizing note, parents met in their regions to discuss ways to continue building Black-Brown solidarity back home, through similar political education, building our numbers and power,and elevating the role and importance of grassroots Black and Brown parents in the movement to end the STPP. A panel of parents from each region then shared with the entire group their commitments to continue the movement-building back home.

We began something incredibly important this past year when we committed last June to hold this statewide exchange. Frontline organizers from a number of DSC-CA organizations co-designed and co-planned this convening through monthly calls for a year. In the process, a collective and shared commitment to building Black-Brown solidarity among parents, in order to dismantle the anti-Blackness that is baked into the STPP. This has emerged as a core movement building strategy for DSC-CA. On Saturday, July 13, 2019, we did not hold back. We created the conditions for grassroots parents from all over California to have the unique opportunity of thinking critically and studying together, something rarely afforded to parents and grandparents, but essential if we are to truly build an intergenerational movement that learns from history and intentionally constructs a different future.

Note: This article, written by Maisie Chin, is republished from DignityInSchools.org. Maisie is executive director of CADRE and a leading member of the DSC CA Strategy Team.