Letter of Solidarity for MILPA 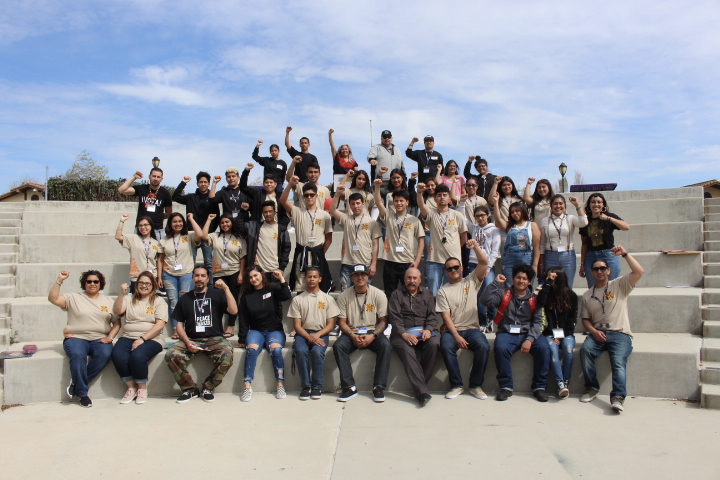 Letter of Solidarity for MILPA:
Standing with MILPA in Salinas,
Under Political Assault by Law Enforcement

By now, you have heard that the MILPA Collective in Salinas has been the target of a dangerous smear campaign in the media by law enforcement in Monterey County. In a series of news stories set in motion by the Salinas Police Officers Association, it is clear that law enforcement and biased media outlets have colluded to discredit and tarnish MILPA. MILPA was targeted because of their values and their successful work in cultural healing and racial justice. They have been vilified and accused of being influenced by individuals whose motives do not uplift movements and build the power of our communities. One of their respected leaders, Israel Villa, has had to step down from his staff role at the organization.

This is just the visible tip of the iceberg. From the beginning, this attack has been political. It is a tactical retaliation for MILPA and its local partners’ successful work to challenge Salinas law enforcement’s power and finances.

MILPA is a member of our statewide coalition, Dignity In School Campaign California. Our vision is to construct a world where the school-to-prison pipeline does not exist, a world where the historical harms of genocide, slavery and colonization have been repaired. Concretely, for us that means working to end school pushout (via suspensions, expulsions) and to remove police (“School Resource Officers”) from public schools. These two strategies are how we begin to dismantle the forces, systems, policies, and practices that uphold our society’s default response to poverty, non-whites, and gender nonconformity: criminalize, punish, suppress, detain, incarnate, and permanently exclude from participating in society.

If you currently work with or support MILPA, DSC-CA or any of our member organizations— whether you are an ally, a funder, or an advocate—we are calling on you to join us in standing resolutely with MILPA as they weather this storm.

The fear is real: How we are impacted from Salinas to Sacramento to South L.A.

The brothers and sisters of MILPA are part of our movement family, along with several other organizations based in Monterey and San Benito Counties who are working together regionally. They have shared with us that the attack on MILPA has impacted all of their organizations. We have learned that law enforcement not only went covertly to the media but they directly contacted the organizations’ funders. As if that weren’t enough, the allegations make MILPA look like they are a menace to society, as if MILPA were operating recklessly without a clear vision for community safety, racial equity, cultural healing and youth justice.

Yet more harmful than any of this are the trauma, false rumors, and gossip that have ensued both in Salinas and, sadly, within our own movement. These law-enforcement-crafted strategies have damaged the trust MILPA was gaining with elected officials and county departments and their ability to advocate to them. The breakdown of trust among community members is also real. People who’ve known each other for decades, people who’ve been base building together for years—they are now looking at each other with strange doubt, questions and fear behind their eyes. Rifts are cracking open between friends, organizations and even between family members and comrades that may take years to heal, if they ever will.

From our study of history, we know this is an old playbook. Those who oppose our struggles for freedom have never used direct force and threats alone. They have also always used psychological and counterintelligence tactics to divide us internally. They seek to turn us against one another because they know that our strength comes from our unity and the powerful community we build with each other, often at great risk.

And the fear is real, for all of us. Every single one of our member organizations knows that we could be attacked in a similar way. We all have members in our organizations and in our communities—and many of us have staff, leaders and relatives—who were formerly incarcerated or have been caught up in the justice system in some way. We know we are vulnerable because many of us have seen our members intimidated and silenced by law enforcement for speaking out in our local campaigns.

Yet we will not allow anyone—let alone those who created the desperate social conditions and structural violence that have harmed our communities—to tell us who we can or cannot work with. We will not abandon or be divided from any of our young people and community members, most especially those who have been incarcerated or have been involved in the system.

Why now? The political reasons behind a political attack

So let’s be clear on why MILPA has been targeted by Salinas law enforcement. It was not a random decision out of the blue. In the past 6 years, MILPA and its local allies:

MILPA that are symbolic or philosophical. They are being attacked because they have been winning in ways that directly challenge the material power of law enforcement in Monterey County. These victories have resonated in the county and across the state in ways that deeply threaten the status quo:

Why Salinas? The meaning of grassroots power and healing in rural and semi-rural areas

To most of us, community outrage and resistance to police brutality seem naturally rooted in major cities: New York, Chicago, Los Angeles, Oakland. Yet in California there is a long invisible history of police violence and repression in rural and semi-rural regions like the Central Coast, the Inland Valley, and the Central Valley. In these regions, law enforcement—in the form of sheriffs, police departments or the INS—has always had a vicious advantage that flies mostly under the radar because it targets predominantly Latinx farmworkers, undocumented people, immigrants and migrant laborers with relative impunity. Vulnerable workers, families and extended families in these regions are historically locked in a fear-based relationship where there is little to no organizing infrastructure or resources to fight back and they must prioritize their ability to survive.

To see the work of MILPA and its local allies against this backdrop is to see yet another dimension of the power of their work—and another reason they are being targeted. Like the farmworker organizing movements before them, they are a beacon to DSC-CA members and communities in similar non-urban areas where some of our most vulnerable communities of color are concentrated: Fresno, the San Joaquin Valley, San Bernardino, Riverside. When MILPA first joined DSC-CA in 2014, they were leading an extraordinary community-wide conversation to address a series of police killings of Latino farmworkers. We were moved by how they demanded respect and dignity for those harmed, how they reached across divisions and conflicts with a constant focus on healing steeped in indigenous culture (la cultura cura), how they built incredible solidarity with Seaside Black communities.

MILPA and our Central Coast partners are key to building a complete narrative of who is harmed by state violence and the ideology that law enforcement is the solution for all society’s ills. They are holding the line and lighting a fire that can pierce the invisibility of rural regions across the state. If we turn our back on them, then we abandon all of our people who are struggling and resisting in places like Salinas where there are few resources and support. Rural law enforcement is counting on us not to prioritize MILPA’s defense or to be resigned in our low capacity to move in any real way to support them.

What can we do?

MILPA has asked us to share solidarity stories and videos from each of our communities of how we have experienced external attacks on our organizations and attempts to divide us internally. They want us to help remind communities in Monterey that they are not alone and that our communities have been through this before and are resilient. Please send your messages and videos of love and support.

In whatever arena you work in, we urge you not to remain silent when you encounter disinformation or lies about MILPA’s work and the political nature of this attack. Please continue to speak the truth of who MILPA is and the power of their work. One of our core principles is community self-determination: we believe in each community’s internal ability to create justice and accountability through healing and repair, without needing to exact punishment or exclusion. To all of our friends, allies and supporters who feel torn or caught up in the internal conflicts and harms that have sprung from this attack, we want you to know that we understand how painful and difficult this is and we gently ask you to place your trust in healing and restorative justice as a way to move through this.

At DSC-CA, we are taking this as a sober lesson to get ready for what is to come. In Oakland, Black Organizing Project (BOP) is leading a campaign for Police-Free Schools By 2020. All across the state, each of our member organizations is building toward the police-free school systems that BOP and MILPA are fighting for. Because we fight to win, MILPA was only the first; they will not be the last of us to be attacked in this way. As we remember the long legacy of repression our peoples have faced, let us hold each other, share lessons of survival and self- defense, and be rooted in the strength and traditions of our elders and ancestors who stood resilient against no less.

For 100s of years, our oppressors have done everything in their power to extinguish our light— and we are still here. We will not be made to turn or hide. We will burn bright.