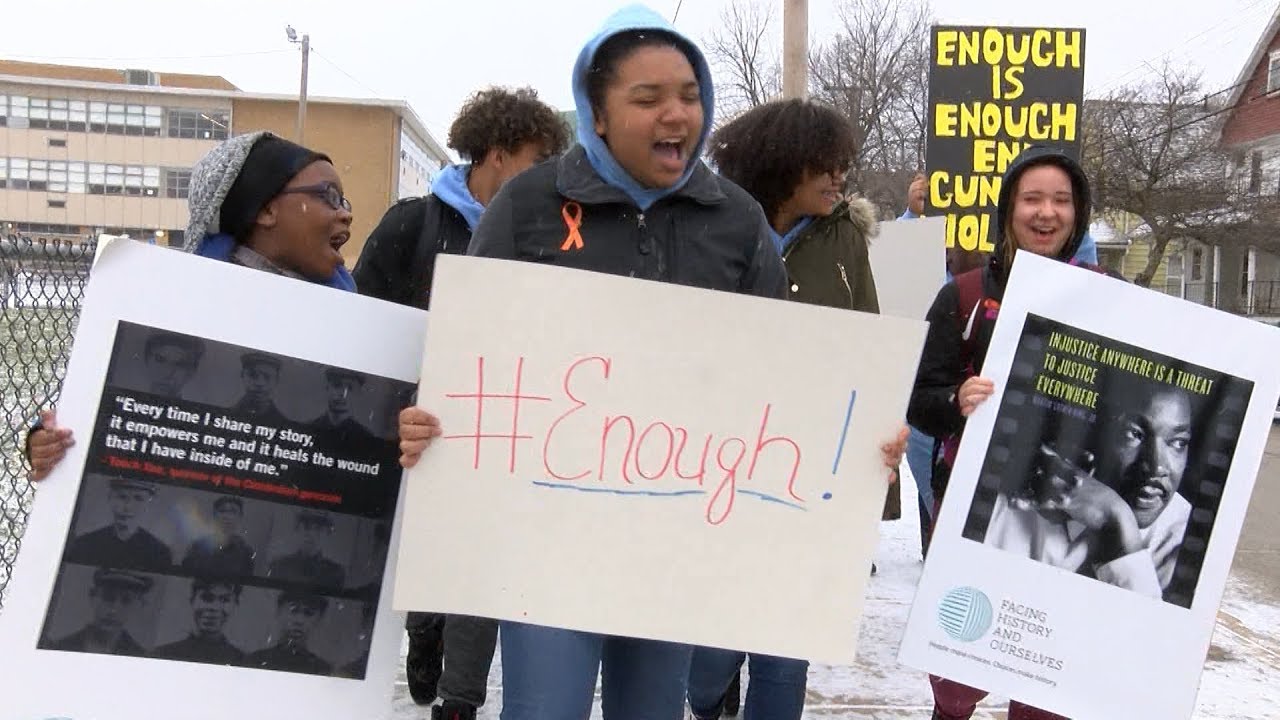 The young people who survived the mass shooting at Marjory Stoneman Douglas high school in Parkland, Florida have sparked a national conversation about gun restrictions and school shootings. Organized around the battle cry of “Never Again,” these students have organized school walkouts and demonstrations, mobilizing hundreds of thousands of young people nationwide. Dignity in Schools Campaign California commends the courage and resolve of these young activists and draws connections with our own efforts to end the equally violent ‘school-to-jail’ imperative that structures daily life in many California schools, particularly for Black and Brown students.

Gun Violence In Other Communities

Just as painfully and intimately, we know the harm, trauma and destruction of gun violence in our communities. Yet, violence cannot be simply compartmentalized as individual acts. It’s Stephon Clark murdered by Sacramento police while holding his phone. It’s Romulo Avelica-Gonzalez being arrested by ICE dropping his daughter in school in Los Angeles. It’s Brianna Bell who was body slammed by a La Mesa Police Officer at Helix Charter School in San Diego. These are daily reminders that violence is not color blind; it’s structural, painful and intolerable.

We are calling for an expansion of the national dialogue on school shootings to include the full range of violence faced by children and families of color in this country and an unflinching assessment of its historical roots. If we only view violence in terms of contemporary mass shootings in schools, we fail to see the everyday forms of violence Black and Brown communities face including the violence of poverty, homelessness, unemployment and neighborhood displacement. The reality is that violence in our schools, violence in our street, and violence in our society are intimately entwined in our own government’s values and prioritization of militarism, policing, deportations and incarceration and deeply rooted in this country’s history.

The History of Violence

The United States has a long and bloody history of violence that began with conquest, genocide, and slavery that continues into the present day. This violence has seeped into many U.S. institutions, including our schools. Violence and police presence in our schools did not start with Columbine, Newtown or Parkland. Violence in U.S. education began when the mere act of learning how to read and write was outlawed for Africans held captive throughout the Southern slave states. It continued with the abduction of Indigenous children to be dehumanized in the name of “education” in so-called ‘Indian’ boarding schools. Violence was reflected in the banishment and burning of Black ‘colored schools’ in the so-called “free states of the North,” in the corporal punishment and banning of speaking Spanish in southwest schools, and in the ‘separate and unequal’ structure of Jim Crow education. More recently, violence has thrived in the current school to jail track for Black and Brown students and it is replicated in the underfunding and closure of public schools in Black and low-income communities.

Knowledge of this history shapes our opposition to contemporary responses to the Parkland school shooting that call for more police and armed security guards in schools. We already have seen the stationing of state troopers at Stoneman Douglas High, the introduction of federal legislation to increase school police, and multiple calls, at state and local levels, to arm teachers, invest in bulletproof vests, and increase spending on surveillance and policing. We know that many parents, students and community members can find comfort in this type of response. More police has become the predictable response to every social problem; we reject this idea and politics wholeheartedly. Policies that bring more guns and more police into our schools will only fortify educational racism and aggravate the already over-policed and militarized culture of our schools.

In the same way that knowledge of history shapes our understanding of the current political moment, it also shapes our understanding of activist responses. The Parkland activists are not the first to organize around the slogan “Never Again.” On the contrary, these two words have been expressed by the survivors of the German Nazi genocidal acts of holocaust upon Jewish, Romani Gypsy and Queer peoples as a remembrance to oppose all forms of genocide and opposition to fascism and oppression. “Never Again” has also been an insistent, tenacious war cry for Black, Indigenous, Mexican, Latinx, and Asian activists, as well as for women, Lesbian Gay Bisexual Trans Queer and other oppressed groups, in their long-standing struggles against racial injustices in U.S. schools.

Our “Never Again” is rooted in the Black-led Reconstruction and slave revolt that brought down chattel slavery and opened up the first public schools. Our “Never Again” abolished Jim Crow education and led the Chicano Blowouts. Organized by students, parents, and their broader communities, our “Never Again” birthed liberatory movements for ethnic studies, critical pedagogy, bilingual education, restorative justice and other transformative educational practices. Today, our “Never Again” rejects the school to prison pipeline and works to build a movement from the ground up, in California and nationwide.

We hope this new wave of activism can be maximized to end the school to prison pipeline and to radically embrace and fight for truly safe, holistic, and healing schools for all. As local, state and federal officials call to further police and militarize our schools, Dignity in School Campaign California rejects these false solutions and prepares to build a long-term movement with communities, students and parents across the state. This movement will commit to end all forms of violence in our schools, including those associated with policing, criminalization, and institutional racism, as well as those associated with guns.

Note: this document can be shared, but please include a reference back to the original location. Word version download:  DSC-CA _Never Again_ Statement Final
Photo Source: http://www.clevelandmetroschools.org