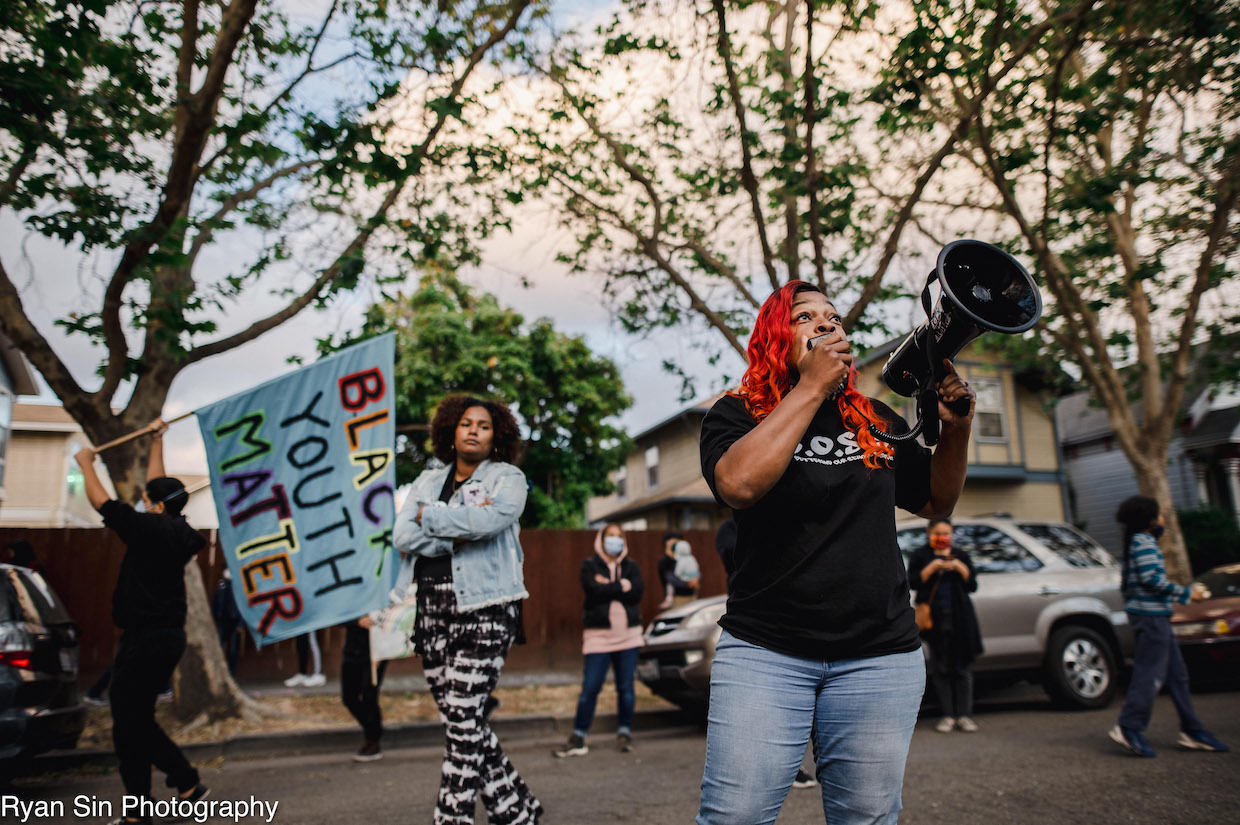 Where will you be next Wednesday when the whole state watches Oakland’s school board vote on whether to become the first urban district in the country to disband its internal school police force? Up and down the state–from Stockton to LA, from Moreno Valley to Salinas–our Black and Brown youth, parents and communities are pushing their own school districts to similar votes over this next two weeks.

This moment is a test of your leadership and of the substance of your solidarity with Black communities’ outrage and demands for real change:

You cannot sit this one out.

School policing is inherently part of the school-to-prison pipeline that devalues and criminalizes Black lives. In Oakland, Black students are 26% of OUSD students but 76% of school arrests. OUSD has a long record of disproportionately suspending, expelling, involuntarily transferring and arresting Black students, all of which increase the likelihood of remaining stuck in the youth and adult criminal injustice system. The pattern is mirrored across the state. In 2015-16, the most recent year with statewide data from the US Department of Education’s Office of Civil Rights Data Collection (which are generally understood to reflect underreporting):

When faced with the racial harms of school policing, for you to say, Governor, that it is not your role to intervene in the decisions of local districts would be to echo “states’ rights” arguments used to justify the “deafening silence” and “polite” racism of white liberals that Dr. Martin Luther King, Jr. once decried. You have in your hands today the power to intervene decisively against the ticketing and arresting of Black children and youth at school: revoke the statutes that authorize and compel districts to have police in schools.

The political moment is here.

Police-free schools is a visionary banner that has been carried by the parents and youth of the Black Organizing Project (BOP) for 9 years. It is also the proud flag of our statewide movement, Dignity In Schools Campaign California. We have been shoulder-to-shoulder with BOP, taking on school policing and the criminalization of our children in our schools in every corner of the state long before national attention turned our way. Behind us is an endless line of experts and advocates in all areas related to the well-being and education of children and youth. Pediatricians, experts in public health, mental health, behavioral health, youth development. Researchers and faculty in K-12 education, school counseling, school psychology and social work. Advocacy communities in special education and immigrant rights, or those working with foster youth, homeless youth, queer youth. Practitioners of juvenile defense and civil rights law. All will advise you that school policing is not in the best interests of children and youth. All will describe its disproportionate impacts and the myriad harms that come from exposing children and youth to racialized criminalization at school. With the labor movement increasingly expressing support, it’s also important to note that in one of the few times California voters were asked whether hiring a school counselor or a police officer would be more effective at preventing violence, they overwhelmingly chose counselors, by a ratio of 2 to 1 (67% to 26%).

Last month, you made the bold statement that California does not need a prison system for children and youth. Why, then, does California need police in schools? Last week in your visit to Oakland, you identified this moment as an opportunity to rethink “the responsibility and role that we place on law enforcement to be social workers, mental health workers, get involved in disputes rebadged is a gun unnecessary.” There are no clearer, more urgent place than our schools for rethinking the role of police in our society. As we engage in this moral reckoning with the structural racism of school policing, is essential to guard against pitfalls.

We have seen too often that attempts to restrict the use of state funding for school police are easy to evade and difficult to enforce. Districts simply shift from relying on state dollars to relying on local revenue sources to fund school police. The net result is that police remain, and essential services are often crowded out. Because of this shell game, interventions to defund school police at the state level are only symbolic gestures. The most powerful intervention in your hands, Governor, is to disband school police by revoking the statutes that authorize school police and that compel their involvement in schools. We urge you to reject any repackaging or substitution of school police with school-based law enforcement of any kind, especially probation. We hope the State Policy Framework we have attached to this letter will provide useful guidance.

If you decide this is not the fight for you, at least do not add harm.

Please resist the immense pressure in this moment for cookie-cutter solutions and politics as usual, which will only add active harm to your silence. The most dangerous involve the reshuffling and repackaging of school police we have called out above. But we also have no doubt that you have advisors suggesting a worn menu of more “reasonable” measures, such as banning school police from using traumatizing or violent interventions (pepper spray, restraints, mental health holds, etc), creating school police accountability or oversight mechanisms, requiring training for school police, and so on. At a time when our member organizations and fearless parents and young people are taking the risks to demand police-free schools in hostile regions of the state that are very much unlike the Bay Area or LA, such measures would put them in harm’s way. You would be sending a message that the governor of California is against them, that you believe there is a legitimate place for police in schools, that there are ways to make school policing “work”—if only the police would just not use pepper spray, if only they would agree to have complaints reviewed, if only they would agree to be trained. Even with our flagship fight in Oakland where there is a rising tide of support behind BOP, we are still seeing opposition from those who are entrenched in the culture of punishment and fear. We have people raising threats against BOP. We have people attempting to water down or sabotage the George Floyd Resolution. And we have decision-makers in Oakland who had no problem cutting 100s of librarians, school counselors and restorative justice coordinators year after year now standing up passionately to defend just a dozen school police officers as essential caring adults whom we cannot afford to lose. It’s clear which side they are on. Governor Newsom, which side are you on?

Uprooting the structural racism and ant-Blackness of school policing

In 1979, when the foundations were being laid in LAUSD for the armed security guards and police that would become the country’s largest independent school police department (now 410 sworn officers and larger than many municipal police departments), the district’s Black Education Commission issued a 50- page report in protest:

The Black Education Commission is united in its opposition to the two school security programs…It is quite clear to us that these racist and repressive security programs and related proposals are aimed primarily toward inner city secondary schools. By its action the board has made certain that the daily harassment, punitive measures, regimentation, and prison-like conditions for Black students will be further intensified. This school district should more properly be called the ‘Los Angeles Unified Prison System.’ Lacking only gun rails and elevated observation posts, most inner city high school already resemble San Quentin. Many students feel they are doing time rather than learning.”

Governor Newsom, this is your opportunity to stand with our communities in naming the anti-Blackness at the root of school policing and rejecting its history as a political strategy for social control, mass incarceration and psychological warfare against Black communities. We call on you to

Sincerely,
The Strategy Team of Dignity In Schools Campaign California