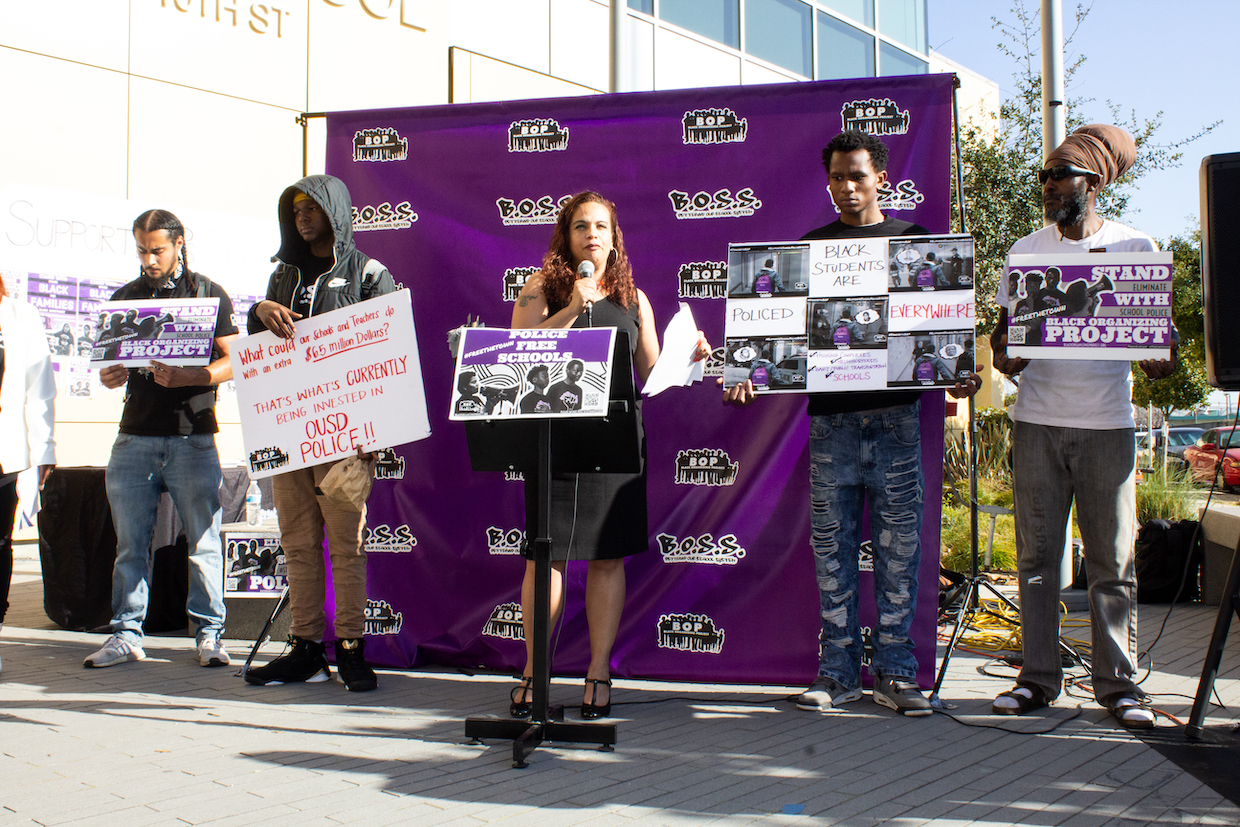 We appreciate your reaching out to Black Organizing Project to discuss strategies for moving toward police-free schools. Given your disappointing public remarks last Wednesday, we are encouraged by your willingness to reflect and to listen to the leadership from our communities on this issue.

Superintendent Thurmond, the political moment is here and the Black Organizing Project and Dignity in Schools Campaign California are ready to work with you to move our state boldly forward. Police-free schools is a visionary banner that has been carried by the parents and youth of the Black Organizing Project (BOP) for 9 years. It is also the proud flag of our statewide movement, Dignity In Schools Campaign California. We have been shoulder-to-shoulder with BOP, taking on school policing and the criminalization of our children in our schools in every corner of the state long before national attention turned our way. Behind us is an endless line of experts and advocates in all areas related to the well-being and education of children and youth. Pediatricians, experts in public health, mental health, behavioral health, youth development. Researchers and faculty in K-12 education, school counseling, school psychology and social work. Advocacy communities in special education and immigrant rights, or those working with foster youth, homeless youth, queer youth. Practitioners of juvenile defense and civil rights law. All will advise you that school policing is not in the best interests of children and youth. All will describe its disproportionate impacts and the myriad harms that come from exposing children and youth to racialized criminalization at school. With the labor movement increasingly expressing support, it’s also important to note that in one of the few times California voters were asked whether hiring a school counselor or a police officer would be more effective at preventing violence, they overwhelmingly chose counselors, by a ratio of 2 to 1 (67% to 26%).

Superintendent Thurmond, this is your opportunity to free California’s students and schools from the repressive social paradigm that has made policing the only social solution for our most complicated social insecurities. For too long, this bankrupt paradigm has diverted attention from the root causes of racism, poverty and divestment and instead focused the blame on our own communities for the structural instability and social precarity that tears into our lives. Worse, we have watched wave after wave of budget cuts on essential school support

staff like counselors, teachers, custodians, and nurses while school police budgets have remained untouchable. The blatantly racist message of these budget decisions–what is expected of our students, what is the goal of their education, what staff are needed and not needed–has gone unchallenged for decades. We call on you to join us in rejecting this victim- blaming and this stigmatizing of our students, families, schools and communities that lies at the heart of the school-policing mindset. We urge you to:

As we wrote in our Open Letter to Governor Newsom, you can open the door to police-free schools in California. By taking these first steps, we could begin working together to reimagine and redefine community-driven safety and build toward the transformation of our schools as spaces for the liberation and self-determination of our communities.

The Strategy Team of Dignity In Schools Campaign California